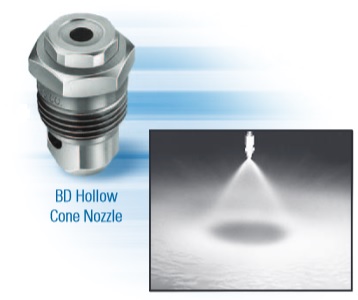 Sometimes, trying to save a few pennies can have costly consequences.

This was the lesson learned by one mine in West Virginia during a routine inspection by MSHA. When auditing mine documents, the MSHA inspector noted that Spraying Systems Co.’s BD hollow cone spray nozzles were specified for dust knockdown around continuous miners. But when inspecting the spray system, the inspector discovered another manufacturer’s spray nozzles were being used and noted the violation.

Whether or not performance was identical wasn’t the issue, however. The mine was not in compliance with its written safety plan and would be fined thousands if the violation was not resolved in the timeframe specified by MSHA.

MSHA has already decided to research the issue and shared its findings with the manufacturer.

–   During the next test using the second size, Spraying Systems Co.’s BD spray nozzle performed as expected and matched the published data. The spray nozzle from the other manufacturer sprayed 24% under its rated capacity at the first pressure tested. As the pressure increased, the flow rate problem increased.

MSHA reiterated its position that the mine needed to be in compliance with its plan and that “substitutions” were not permissible. Video link: Underground Mining Comparison

Just because precision components look identical and the performance claims are similar, don’t accept the information at face value especially if there is a price differential between the components. In the case of spray nozzles, monitor flow meter readings or collect and measure the spray from the nozzle for a given period of time at a specific pressure. Then, compare the readings to the flow rates listed in the manufacturer’s catalog. You can also visually inspect the performance of the spray nozzles by spraying side-by-side. If the sprays look different, the performance is different too.

Spray Nozzles that aren’t performing to specification may compromise safety and create many additional problems:

Before making any decisions about a change in spray nozzles, consider the following:

Spraying Systems Co. is global leader in spray technology. It has the broadest product range in the industry, ten manufacturing facilities and sales offices in more than 85 countries. Spray nozzles, turnkey spray systems, custom fabrication and research/testing services comprise the 76-year-old company’s offering. More information is available at www.spray-nozzles.co.za   by contacting the company directly at 011 618 3860 or by email grant@spray.co.za.

January 28, 2015By adminLatest News
Full Range of Spray Solutions from Ingredient Preparation to Processing to Packaging and Plant/Equipment Clean-Up from Spraying Systems CoNext
Contact Us
Our Products